after seven years of perfecting my mind control techniques I finally was able to get Kate so say YES!!!! That’s right dport7 faithful this saturday november 1 at around 3pm kate and i were at the boat house in prospect park and i proposed marriage. after a slight tear explosion she said Yes!!! and i breathed a hefty sigh of relief (know never know how these things will go). Yes if you’re wondering i did take a knee, and yes I also called the Rybicki’s to ask if it was alright with them before i popped the question. Although i had hopped to blind side Kate with the proposal i think she saw it coming from a ways away. She knew that this weekend was the 7 year anniversary of our first date way back in college. Also lets face it it’s been a courtship of seven years, some would say it’s about time. I could go on and on but you know me i’m not one to gush. We took a shot right after, and i took a close up of the ring because honestly that was the most intense experience i’ve ever had buying anything. 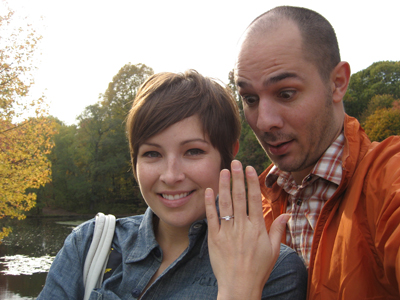 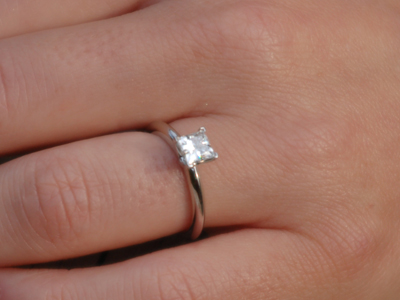 kind of a weird weekend. didn’t do a whole lot but felt as if things happened anyway. first off lets talk about halloween. Although it falls on a wednesday this year people used saturday night to get their costumes on and take the town. i (as I so often do) did not buy a costume this year or participate in any holloween festivities. Mainly because upon entering the store every sluttie halloween costume joke i’ve ever made came true. check this out. along with sexy pirate and sexy nurse some company had the gull to producer sexy parking attendant. I thought halloween was suppose to be scary. I mean couldn’t we save face and at least do bloody sexy parking attendant? I know i have no right to complain but come on.

hey have you seen the trailer for the movie Juno? I saw it a few weeks ago and really got excited about this movie. It’s got some of my favorite people from arrested development. It’s about teen pregnancy but it looks really funny. The girl that plays the lead seems impressively talented. its always nice when a movie comes out that doesn’t look like complete crap. i put the trailer at the end of this blog so you to can get excited!

In other news OSX leopard came out on Friday. To be honest with you I’m really not that excited I mean I run an old G4 powerbook and spending 129 dollars on a new OS just makes me want to buy a new computer instead. I was at the apple store on Sunday and checked it out and felt a bit underwhelmed by it. The coolest new features are in iChat but i couldn’t test that out in the store. It seams like a good buy if you have a newer mac but i think i’ll just wait. Although if any one out there in blog land wants to let me borrow their copy for 2 hours i won’t say no.

tomorrow chipotle opens. it feels like christmas has come early!

so this weekend was kinda slow nothing big to report really. on saturday night i stayed out here in brooklyn and went to a halloween party thrown by one of the girls at work. to be honest i don’t really know the people i work with that well. plus she’s on the account side and i interact with them even less. i thought because it was so close and because i don’t often go out here in brooklyn i should give it a shot. it was kinda fun because i didn’t know anyone there really and they were all singing and crazy by the time i got there. long story short they were all dressed up like the girls from the robert palmer video “addicted to love”. The girl i know had her boyfriend decked out to look like palmer and to be honest he did his best and must be a great sport. Anyway once i got there they insisted on doing a palmer song and were all excited for me to video it with my still camera. they don’t even know about dport7. Some how word got out that it could go on youtube and the excitement exploded. after the performance we went to a bar down the street i think called south paw and danced the night away.