Hello all you new yorkers…… Can you believe that this used to be Coney Island in 1905? All right I didn’t grow up in the city so maybe I don’t understand the true magic of Coney Island. As far as I can tell it’s the place God forgot. I mean have you been there in the last 20 years. I’ve been out there a few times and I always swear I’ll never return. The beach is full of mutants (i’m being kind) and people that don’t know any better (tourist and such). When I stumble upon pictures like this for some reason it fills me with anger. Why did I miss this? Why couldn’t this survive instead of that stupid roller coster. Granted I’m sure this wasn’t built to last in the first place but it’s still seems unbelievable that it’s was in the crap dungeon that is Coney Island today. When, why, and how did everything become so unbelievably run down in the city. The airports are like a 3 world counties bus station. The subways look as if they were built on a dare. For being the richest most powerful city in the world (i have no facts to back that up) it’s really all fallen apart. Anyway I found this pic on a great site I’m sure you’ll enjoy called Shorpy lots of early century pics really fascinating and hi rez. 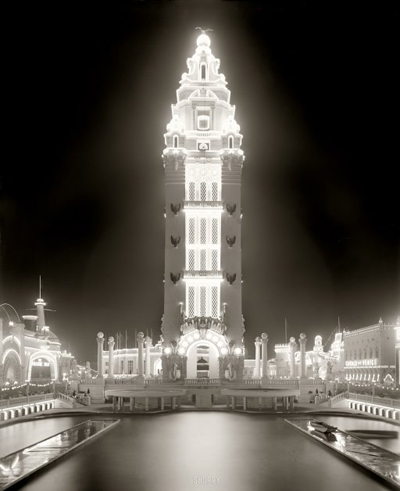