So bad news, no war movie. I know I know I said it was going to happen but low and behold you would be a tard if you took any kind of camera with you to a paintball field. I my friends am a tard and did take both my cameras along with my newly build steady cam. Sadly I was not allowed to bring them to the field of fake war. The day was fun and I’m sore from head to toe. The only thing that was weird was the ref’s that guide you through the game are the biggest dungeon and dragon type nerds I’ve ever seen. This is strange because those kids are usually over weight and hate to get ten feet away from a twinkie. It’s like this game has sponned a new generation of super nerd that sees war as his or her chance to safe the world a defeat an evil war lord from another land. oh god. Check out the the team photo it’s kinda slop they would only take one shoot. Oh and for all you apple fans today is mac world so all the new stuff is going to be announced from 9am to 10:30am pst. click here to enlarge picture 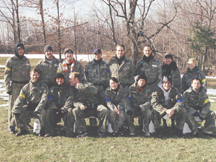