so last night was billy joel. he looked as best as could be expected but sounded great. i was impressed infact by how much life and heart he had in his voice. Although a short and stubby man he did his best to move around the stage. A task he did with little ease and great effort. The piano appeared out of the floor of the stage and bill appeared on stage in the dark to start the show with a long island type power I’ve never seen. He indeed played just about everyone of his hits and of course ended with piano man. i said before i went that i didn’t think billy was what you might call a “rock star”, but infact his music is filled with strong 70’s and 80’s type stadium rock power and I left the garden a believer. thanks billy and kate, who i’ve never seen happier. 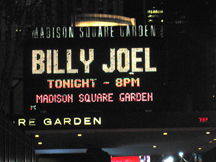