going to the airport has turned in to the last thing i ever want to do. a few years ago the thought of flying some were… anywhere was exciting. now even though i don’t really travel that much it seems to be a chore i’d rather put off as long as possible. right now I’m on a nwa flight back home for thanksgiving. i know it seems odd mainly because i haven’t been home for this holiday in like 7 years. i tend to shy away from thanksgiving because of it’s pushing of food…. usually food i can’t eat (dairy hates me). anyway back to the airport. going through security really isn’t that bad. what annoys me is the line of frantic women laying in to some homeland security officer about how she “went to the website and knows for a fact that she can bring that exact amount of lip gloss and hand cream on the plane” for the love of god just buy it when you get there. after i get my belt back on i head to my gate to sit in the dirtiest waiting area in new york. looking around i swear i’ve seen subway stations cleaner than this terminal. looking for an isolated seat there are always a good amount of attractive girls waiting for my same flight. being shy and in a 5 year relationship i head for the corner. Although i always hope to have one of those attractive young ladies in my assigned row on the plane….. after a few quick phone calls i get in line like cattle to board, and without fail (and this has happened several times i sit next to a older gentleman with a 1889 style walkman with a taped talk radio program from NPR blaring. i tend to sit in the isle so that always leaves the middle man to be kind of a hopeful surprise. again with out fail this is the very last person on the plane. it’s as if i requested to sit next to the person that had a frantic time getting to the airport that day. and of course again without fail it’s not one of the attractive fell dressed young ladies from the terminal. oh no……. it’s always a middle aged dude that smells like a subway sandwiches. if that wasn’t disappointing enough 10 minutes into the flight the subway sandwich dude’s wife comes and says that she needs to sit next to him because she’s freaking out. so because she seemed frantic i quickly agreed the trade sit. turns out the frantic with was in a window seat tucked in by two obese women. thats when i decided to order a whiskey and check out sky mall. that were i found the marshmallow gun you se pictured below. god save us all!!! 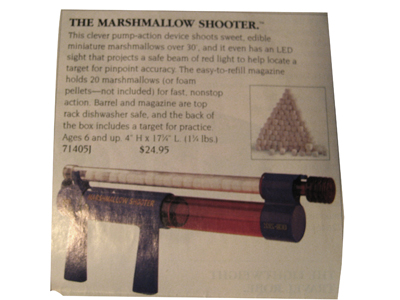