OMG the wii
that’s right kids i got my hands on the new nintendo wii. i just couldn’t resist.. i’m not really a video game person and haven’t even played a nintendo since i still lived at home in ohio. the wii is amazing though. i just have wii sports and man is it fun. the controller really follows you movement well. the tennis is my favorite and boxing is fun too. my friend from work ray came over to help test it out and we both agreed it was crazy fun. the system itself has a lot of cool features like the wii news and weather channels and an online store to buy old nintendo and sega games…. I couldn’t resist and bought the original super mario brothers. you can play with up to four people so i need to get atlest one more wii remote. man it’s just really fun….
so to buy the games from the online store you have to purchuse “wii points” which is kinda a racket. it’s 500 points for a old nintendo game ($5) and 800 points for super nintendo games. it thought that was a bit steep but i’m a sucker.

so come on over and play. 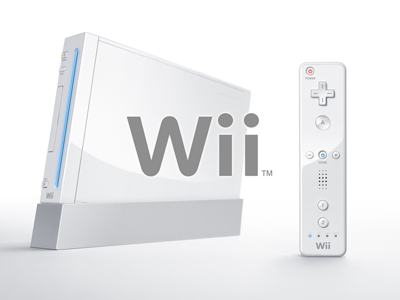