ok so i was on a tear this weekend. went out on thursday night with ian and mark to this great bar called heather’s . i’ve been there a few times and always enjoy the interior and the beer. I took friday off and recovered from the night before and then joined tyson and the toda crew for a while night on the lower east side. we went to good world which i highly suggest to everyone. it’s a bit expensive and slightly pertinacious but they have the best burger and fries in the LES. after getting started there we streamlined the crew and headed out to rock. visited a few more placed saw kid rock and had a dance off at some bar that i keep ending up at but never remember the name. kid rock not exciting kinda sucks looks like a tool. the dance off was difficult and impropt to but in true out of know where paul style i pulled out the moves and even brought back a few break dancing moves from back in the day. i always have the advantage in a dance off being that i’m a tall white bald white kid. that’s what so great they never see it coming. anyway I’ll post some shots in the frames. last night hung out with ian and kate and stopped in to see rebecca for a impromptu birthday party. saw some old friends had a good time but was out of gas and had to go home. 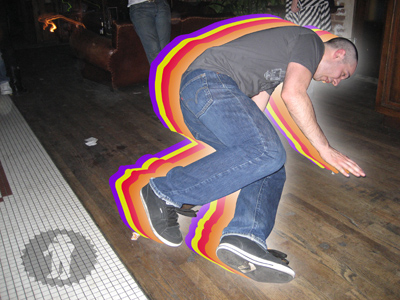