alright everyone this has been a week to forget my friends. for almost all of it i was battling a bitch of the common cold. so much in fact that i called in sick to work on tuesday and wednesday which is a big deal because i haven’t called in sick in a few years now. i’ll tell you what though if your really sick do yourself a favor and take the days off because it really helps man. I’m usually sick twice as long as i was this time. it’s sunday and i feel pretty well. unfortunately because of this illness i was unable to take advantage of the weekend and spent the days sitting in my apt. on my computer.
staring into the warm glow of my powerbook i decided it was time to resurrect pauldiehl.com. this time though it would not be flash. i’ve been burned by flash and i’m going to shy away from doing a full site in it for a while. i decided with this to build a html and css page from the ground up. you might say “hey smart guy this site is html and css what’s the big deal” well smart ass your right but my good friend jenn helped me do most of the heavy lifting on this site so i wanted to try and do one all on my own. if you check it out don’t be turned off by the images up there they are just for placement i’m still working out how the site will be laid out. so check in often as the site progresses.
this is what happens when i’m sick and is raining and no one will hangout. 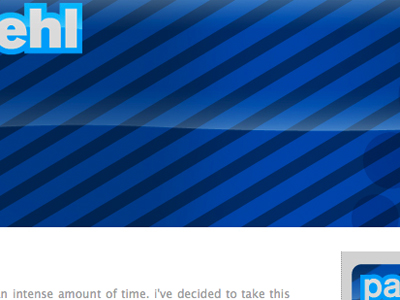