well it was a movie kinda of weekend i guess. stayed out of the bars tried to save some money. friday night kate and i went to go see juno. those of you that read the blog on a regular bases may remember me posting the trailer. it about the teenaged girl that gets preggers and decides to put it up for adoption. it’s actually really really funny. it has a couple of our favorites from arrested development michael cerra and jason bateman who are both hilarious. it stars ellen page who is hilarious and really makes the movie sing. i’m ganna have throw the dport7 official recommendation on this one. unless you have a huge problem with teen pregnancy i would absolutely go see this one. with that said it doesn’t glorify it at all (if thats possible). michael cerra plays the same awkward genius as always. i love that kid.
As some of you might know saturday i asked a few people over to watch superbad. kate ian eban and daniela showed up. it was probably good, because that was all the seats i had in the house. although the lack of response was kind of a harsh reality that no one in new york at least looks at the blog. that’s ok i don’t really write much interesting stuff, but I like to think dport7 is a city wide phenomena anyway. i digress, the movie as a best vulgar, the dialogue had more swearing than yankee stadium. with that said it was hilarious, full out. a bit of advice it’s kind of a guy movie although by some strange anomaly kate enjoys it. for this i blame ian swanson and myself we’re slowly sucking the class out of kate. luckily i think ralph balances it all out.
lastly on saturday morning i got up and took a trip to the newly opened apple store on 14th street. it’s three floors of apple goodness and is of course beautiful. Everything is aluminum and super clean. if only i could buy a mac pro. dport7 would have new movies to bring back readers. 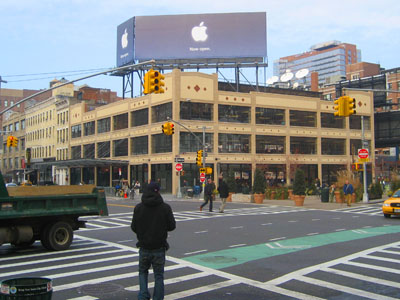