this is going to sound crazy but I just signed up for a triathlon. No, I didn’t come up with this one on my own. Kate and Megan decided a few months ago to do this and encouraged me to get my own team together. Yes, team, it’s a relay triathlon so I only have to do one part. It’s also whats called a sprint triathlon so my portion the running is only a 5K. I’m pretty sure I can handle that. Although let’s be honest I’m probably in the worst shape of my life. The last 4 year I’ve watched my metabolism start it’s slow grind to a more a mature halt. The 9 to 12 hours a day i spend behind a computer hasn’t slowed this process. Neither has my long time love affair with burritos. The real stinger in this story is the fact the the other two guys in the relay are effing pro’s. The bike portion is being completed by my coworker Graham who commonly goes on a nightly ride of 30m miles around central park. The swimmer on the team is a friend of Megan’s that swims 2 miles a day. My only credentials are hacking dell netbooks and having the 3D modeling know how to build a Fiat 500. Not helping.
What’s our team name you ask? We will be called The Japanese Danger Duo…. (Duo stands for danger). Yes I understand that there are three of us. No, none of the members on the team are japanese. hence the humor…. trust me on this one. I’ve been asking Kate what their team name is so far no official name has been chosen. What’s their line up? Well Megan will take the first (and what I think may be the most difficult leg) the swim. Kate will be doing the bike portion, and Sarah will most likely lap me on the run.
This weekend the real training begins if it’s not raining, and maybe even if it is. I will test myself on a 5K lap around prospect park. I figure if I use this as my bench mark training ground even and outwardly skinny yet increasingly flabby guy like myself can at least have a good showing at this my first triathlon. I’ve posted a picture of roughly what I may look like on the big day. 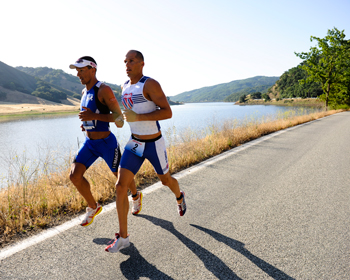