Hold on to your shorts we are pushing the me and paul show again. I added a podcast page to the site to help you more easily access the show. you may be asking yourself “shit are they still trying to do that show? are they still not really talking about anything? did jon ever get that “don’t jar” and if so is it full yet?” To answer simply yes!. The show is getitng better slowly and there are plenty to choose from. What’s nice is you can come here to dport7 and listen from computer in the world or you can click below and subscribe through itunes and pick up the new episodes as we do them. either way we hope you listen and respond to our plea’s to call in and be part of the show. we are also working hard to improve the sound quality. I’ve forced jon to do some recording research and with any luck the next episode will have a much better volume.

did it feel like you lost a close friend? what did you miss the most, the misspellings and horrible grammar or the long explanations about my weekends that sounded strangely familiar as if you read them the week before. No matter, you missed dport7 and by god dport7 missed you right back.
Now let me explain the reason for the outage. There’s been a lot of speculation that it was the economic collapse that took out the site. As most of you know dport7 is a publicly traded company invested in any number of financial ventures. others speculated that with the down turn in the economy that much of the staff was let go and the site was just under powered. This is partly true we finally fired the entire film making wing and that helped free up some much needed funds for the new podcast venture. others speculated i had been killed in a helicopter accident but that’s untrue. (so what’s the real reason paul i’m tired of reading this crap) Well fine!!!! It all started back a few weeks ago when I moved into a new apartment. As all of you know Kate and i moved in together in Park Slope Brooklyn. We found an amazing place and it’s really working out well. I need to take some pictures to post but we are hoping to have you all over soon. Although i can blame a large portion of this on the move the other large portion is that i just don’t have time. between work and getting sick ( just a bad cold no need for alarm), and other responsibilities i feel as if i just can’t find a free moment when i have enough energy to sit down and make anything new for the site. I still have lots of ideas for things i would love to make for you but the energy to make it happen is harder and harder to find. Maybe i’ve just hit a slow patch and i hope so because over the years i’ve put a lot of time in to this site trying to make it not crap. That got a little heavier than usual. moving on……….
So, to come back on a high note last Saturday a bunch of us went up to bear mountain for the yearly octoberfest. You might remember last year we went up for this with Ian and Eban’s parents and really liked it. This trip was a little different though. without any parental supervision to keep us all inline it kinda turned into (for lack of better words) a shit show. we went up with quite a large group of dedicated friends. The boat left the harbor at 9am. Unlike last year with it’s pre WWII boat this years vessel was brand spanking new. Because of the newness the city had yet to grant the ship a liquor license. This upset a few people in the group because this was promised to be a day of debauchery. This stuck fear in to Kate and I hearts. Kate sent out the evite for the event promising a booze cruse and we were letting people down. Luckily though i think this turned out for the best. As a result on the way up to Bear Mountain we decided that with a dry boat we should forgo the ride back, thus spending more time at Octoberfest. We arrived at noon just as the gates opened, and Octoberfest didn’t disappoint. Needless to say i think you can guess what happened next. All i know is we missed the boat back in favor of more german fun and got a ride to the LIRR with Sarah and Billy who get a great big dport7 thanks. I’d like to go into detail but most of it is stupid and embarrassing, although not to mean we didn’t have a great time. I think this will go on to be a dport7 sponsored event every year. although i feel as if you may need to pass an endurance test before its safe to come along. It was truly a hard day of fun. Thanks to everyone who came we can’t wait for next year!!!!!!!! If this picture doesn’t say it all i don’t know what does. Big thanks to kate for organizing!!!!!! you’re a hero!
::::update:::: Check out frames for all the bear mountain photos!!! 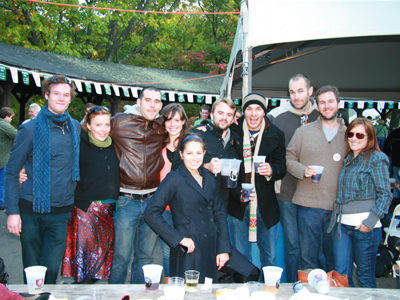