here’s the thing, i’ve been sick. i’ve also been trying to work harder. as such, nothing to share. sorry! I’ll try to have a thought to write about next week.

as i mentioned in my last post mac world was this week. here’s the run down. ( for those of you that think this is nerdy, paul didn’t write this, currently this is dport7 staff member nicholas typing) anyway the big announcement is that apple released a new super thin ultra portable laptop called the macbook air. you can see in my picture below how i feel. SO WHAT its super thin. great! don’t get me wrong i understand the engineering mastery behind all of this, but really? this is what you want to spend your resources doing? that said I’m sure once I see it in person I’ll have the over whelming urge to buy one.
what else did they announce you ask? well not a lot. some crap update for the appleTV, and new apps for the iPod touch (which was needed) but other than that it was kinda slow.

friday ian, kate, sara, her friends and I went to this piano bar on the upper east side called brandy’s. its pretty fun, the piano guy starts playing at 9:30 and the place fills up. everybody in the bar sings along and from time to time the waitress or the bartenders come up and sing a few songs. they’re all pros working at the bar as they try to get in a show i guess. it’s surprisingly pretty fun. people get drunk and rowdy and start having good time. Here’s a video clip of the same singer and piano player we saw on friday just to give you a idea of what it’s like.

Lastly yesterday we went and saw no country for old men the new cohen brothers movie. It’s exhausting! It’s really about a guy in the wrong place at the wrong time who finds some drug money and tries to keep it. The drug kingpin sends some crazy murdering guy to find the money and well you get it. It’s a good movie it really moves it’s just kinda too smart for me. 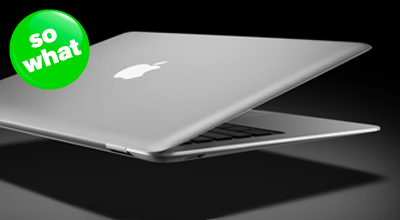 so as we all know i have a phobia about aging. so i thought it might be a good idea to start hanging out with a younger crowd? this is aviv he’s kind of hard to keep up with but i’m trying. (see picture below) was that funny at all? i think the older i get the more consistently less funny i get. it could be every year i’m more tired and i have less time alone with my brain to think of funny things. any way the real explanation to why there’s a picture of me and a little baby on the site. my friend, co-worker, and member 95 jonathan eshe, jonathan and his lovely wife invited us over for their son’s aviv 1 birthday. kate ian and i made the trip to hoboken and enjoyed the afternoon although by the time we left felt totally exhausted. I’m not really sure why though. (side note) i made the bowie shirt the kid has on. now that’s a happy birthday.

other than that is was a slow weekend with out much to report. hey did anyone see the halfass golden globes announcements last night? i saw the people on NBC (i think) they had some tool reading the winners and not only was it less than entertaining but they guy the had the dumbest stuff to say i think I’ve ever heard. i could only find one youtube clip of this tool (the guy on the left) although this clip doesn’t show just how dim this dude is.

lastly mac world is tuesday so look for the super cool coming your way!!! 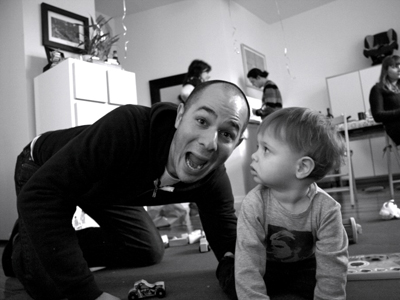 can i just say I AM APPALLED at the new american gladiators not only did they pretty much just go to the back lots and dust off the old set but the new eliminator (the obstacle course event) is crap. i’m not sure how i feel about hulk hogan hosting this travesty along with some women that seems completely out of nowhere like they picked her out of the audience 10 minutes before the show started. now, lets talk about the gladiators. the new set of lady gladiators are for a lack of a better word, dudes. especially the one named fury. trust me watch it fury is totally a dude.

anyway went go carting on saturday pretty fun. turns out i wasn’t born to be a professional driver. the other guys are all about their track times. i’d rather just try to flip the cart and see if i could catch it on fire. guess i’m just not a competitor.

lastly kate and i went to kidrobot and i picked up a munny. i don’t know why they’re just kind of funny. these are do it yourself munnys so you can take some markers to them and do your own design. I have a bit of a problem when it comes to this. the munny looks so good all in white that i have a hard time dealing with the fact that i might screw it up if i take some markers to it. anyway i still need to name it so if you have any ideas let me know. hey check out the little accessories that come with the munny. he has a cape. 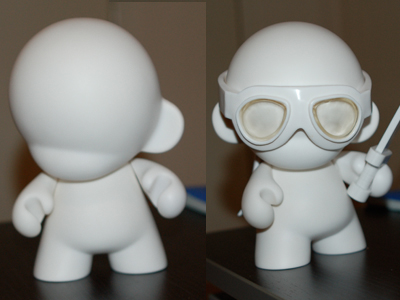 alright everybody, well happy new year!!!! so for new years eve kate ian and i met up with michele and erin to go to allie’s place for a new years party. it’s kinda a weird college flash back. although we all collectively had a great time. I’m ganna be honest with you kate and i and everyones else for that matter bought in the new year with a bit too much to drink. it was great to see everyone.
Anyway lets talk about 2008. first off uncle urb and urbn cowboy is back. for those of you that have been around the dport7 halls for the past few years will remember. also bellafrench got a face lift for her site so check it out.
new years resolutions:
well i don’t really have one. i just want to do more dport7 stuff. for you the reader. so get excited.
check out the FRAMES for the last shotes of 07…… soon to be replaced with 08 (sorry for the quality most were taken with iphones) 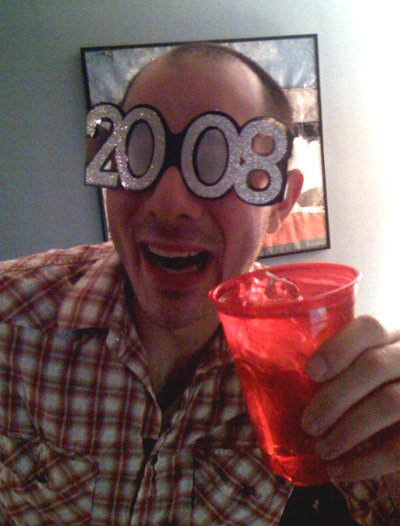