UHHHHHHHH you know with out fail if your looking forward to going away for the weekend it means the week before hand will be a bitch. nothing extra special work has just seemed a bit grueling and it’s been a pain getting dry cleaning done and tying up loose odds and ends. Although the overwhelming bright spots in the week has come in two doses. 1 the third season of arrested development was released on tuesday. although i haven’t gone to pick up my copy yet i am excited to see the best show to get cancelled after only three seasons. 2 and this is a big one because it involves quite possibly the best TV show ever made… sifl and olly. I found this application called tudesock. what it does is allow you to rip any video off youtube and convert it and place it on your video ipod. it’s uber simple and it has allowed me to get the old episodes of sifl and olly to watch on the train in the morning. it makes all the difference in the world. it’s still funny as all get out and i suggest you go do the same as i have. to get you started i put one of my favorite clips up that started my day off right today….. oh and i too sure do miss the 80’s

it only happens once a year, some say if it happened more than that manhattan would have to close for a week just to recover. yes dport7 faithful last night was the one and only short shorts party. I think the turn out doubled from last year and the short shorts participation was well over half. just like last time everyone complains about having to wear the shorts but then has a great time. It was an over cast day that threatened of rain and was conveniently the coolest day in august with the temp hovering in the 60’s. Not the ideal weather for the short shorts but everyone cowboyed up to the occasion. You know for the last few years on the invite i’ve stipulated that if you don’t wear short shorts your required to bring extra beer as a penalty. to my constant disbelief people adhere to the rule. the winner of the shortest short shorts went to my good friend dan kavanaugh check out the pictures for the guy in the blue shorts that make you question right and wrong. Anyway click on the picture below to go straight to slideshow because the pictures are better than my poorly written post. i do although want to say a big thanks to rebecca and allie for letting us all use there roof for the party and for rebecca being the best co-host the dport7 staff could ask for. oh and for a quick look check out frames.
OH and please please please if you have pictures from the party email them to me at paul@dport7.com i missed a lot of people. 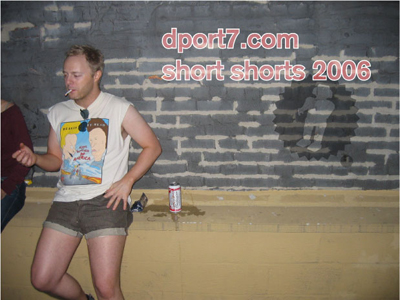 last night kate,sandra,chip, and i went to see the shins at mccarren park pool. let me start off by saying this venue is crazy easily holding 6000 people. It’s an old drained pool from the 50’s in williamsburg brooklyn. with out a doubt the biggest pool i have ever seen. i would say a football field in length but very shallow which i thought was strange. being that the walls of the pool are only like 3 to 4 feet high it really makes for a perfect place to have an outdoor concert. it was a beautiful late summer night and the crowd was calm. as for the shins well……. they’re not really a rock band. infact i don’t really know what to call them. regardless they played a good show. if you know the band their songs are kind slow and soft, but for the show the pumped them up and tried to rock as best they could. They played all the crowed favorites and a couple of new songs. I don’t think anyone was disappointed. OH posted pictues in the slideshow

and of course the short shorts party TOMORROW invite

I know it’s been a media blitz but here’s yet another reminder. the 2006 32nd annual dport7.com short shorts party! as i remember last year was some what of a success and we all had a pretty good time. this year has hopes of being bigger and better. it’s sill in manhattan at a good friend of the sites rebbecca’s roof top. i guess if your new to this concept you be be asking you self why in the hell would i want to go to manahattan and wear short shorts on a roof top. the simple answer is it’s something you just need to experience. being in a place with a bunch of people all wearing short shorts is a freedom in which few can expound upon. so if you not doing anything on friday night (hell even if you are) check out the invite and come the the coolest party manhattan may ever see……..ever.

so every few months i get this urge to get the t-mobile sidekick. why? well i could email and text like the cool kids. the other thing is that i think i could blog with it. that means more great dport7 blogs for you to enjoy. like i said i this urge comes along every few months and with out fail either i talk myself out of it or someone else does. kate has told me on more than one occasion that in-fact the side kick is the homogay. ian says i’m a tard, and the cost to buy it and switch to t-mobile is poopie. so i thought I’d ask the the dport7 faithful what i should do. should i do this or is yet another pointless paul purchase! I know for a fact that the guys at work would give me hell for it, shit they think I’m a tool for having an ipod. so is worth the ridicule? maybe. it means more dport7 content. lets not forget the sidekick 3 has a 1.3mpx camera on it for catching all the crazy stuff that happens. 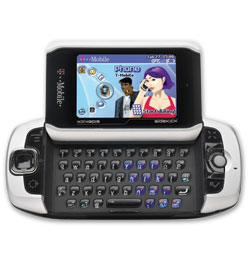 so this whole moving thing is stressing me right out….. ian and I have decided that it’s time to end this roommate era….. sadly. I had decided to try and stay in the current building were at and just change to a studio apt. I called the rental office today and the lady that answered the phone (huge bitch) said there aren’t any studio available. I asked about october and she said again no availability. so my sure thing got kinda shot. see here in nyc we have brokers fees. These brokers fees are paid to the ass clown that shows you the apt. it tends to be 12% of the total years rent. complete horseshit!!!! now I have to try and find another studio that will cost twice as much and put me in the poor house. this entire thing SUCKS…. if you live in NYC never move it’s a racket. if any of the faithful want to move up here and be my new roommate let me know because this hole thing is stressing me out……poop

UHHHHHHHHH…. So this weekend has been a lot to handle we got the good and the bad. first off friday was ian’s big 25th birthday. I hung out with his little brother eben all day looking for some thing for the big guy and found one of those cool camping jet fuel cooking stands. then we met up with ian and his girlfriend for dinner. After that it was a short walk to a bar in parkslope called union hall. to be perfectly honest with you it was a pretty nice bar. it just opened so the crowed was very mixed (old, young,rich,indie) and a bit awkward. ian didn’t seem too into the whole thing so it was kinda a slow night but it’s always nice to go out to a new bar (pictures in frames). Yesterday was the beginning of the rest of this month being hell. The lease on this apt is up and ian wants to move closer to work and resturaunt and i can’t blame him. although i hate moving it’s expensive and kinda scary. We looked at some places yesterday and they all cost 4 to 5 hundred more than what we pay now and were smaller and shittier. i can’t say I really don’t want to move but if we decided to stay here I’d be just as happy. after disappointment and depression we all went to see my favorite band the format. it was me,kate,sam,ian,ireta,eben,and phil anderson. kate sam phil and I loved the show it was a lot better than i thought it would be and i really thought the band played with a lot of heart. I had no idea but there were about eight guys in the band. the lead singer doesn’t have the strongest voice in the world but really used it to it’s full potential. ian and his crew seemed unimpressed by the entire show sadly. I always hate asking people to go to band if they don’t know them or like the music. anyway wish me luck in the next few weeks and check out the video from the show.

dport7 would like to take this opportunity to congratulate two of it’s best members aaron and allison on their delightful and thrilling engagement. that’s right ladies and gentlemen she said YES. i think i speak for the entire staff when i say we are excited and filled with internet joy that uncle urb has found a mate. so show off the ring smoke some cigars and start making the wedding plans that will test the love of any human soul. they sent this picture this morning check out the ring (circled in red for you convenience) 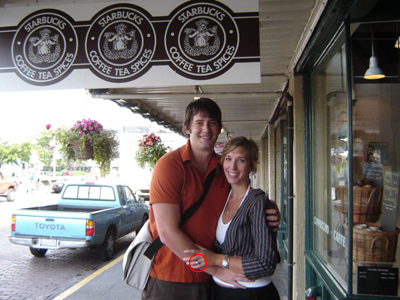 in an effort to stay healthy I went to the dentist last week. why? well a filling I had fell out. after two tries the guy got one to stick and i continue to have shit for luck with having healthy teeth. moving on, my parents came into town this weekend for a visit , and as always it was a treat. where I live in brooklyn there aren’t any hotels so they stay with me. i get to re-live my air matters days and ian my parents and i all get to know each other a little better. we had a chance to see phil and leena. they needed a picture to have on display during the wedding.I was happy to use the D50 to help them out. My parents got to say hi and congratulations. After that it was off to see little miss sunshine. to my surprise my parents loved it and didn’t think it was bizzare. it was a good visit but as always it was exhausting.