art? you would think that after going to art school and working in a design career that I would be a art lover. I tend to almost be the opposite, for the most part art annoys me. most of the time it’s just some ego crazed ass clown telling you what you should like and if you don’t your a idiot or “less than”. I’ll let you in on a bit of a secret most famous art is only famous because it’s considered to be a new idea that’s never been done before. although if you work in the creative field you know that’s a load of poo because everythings been done we just change it slightly and call it our own.

Anyway with that rant said i bought my first piece of art recently and I’m kinda excited. We were down in soho and as you might know artists set up little stands on the sidewalk and try to sell. kate caught sight of this jem and i decided i liked it. not because of any artistic breakthroughs but for the simple reason that it is a robot with cassette tapedecks for a chest. The guy started off by telling me that he usually sells these for $220 but would be willing to go down to $150. I stopped and realized there was more than enough room to bargain. After a moment of listening to what you might call an impromptu to artist statement I talked him down to a decent number under $100 because this dude’s gotta eat to. Either way I got it back and i think it may look pretty hot in the new apt. 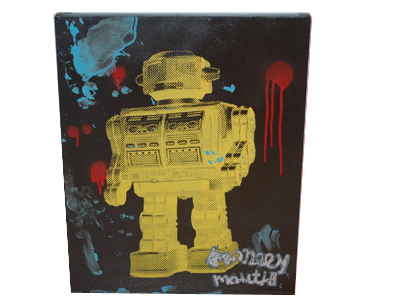