#1.. My brother john was on TV the new for a medical study he did on hockey players. boy genius got his paper published and the doctors liked it so much they put it on the news check it out (you have to scroll down the page to the medical section and click on the hockey link)

#2.. i went to a christmas party at BVA’s and Gonz’s house on friday night after the nice christmas party (that’s where ian works) ian got preoccupied at his party so i headed out to BVA’s and Gonz’s here in brooklyn. it was a pajama party, i had no idea. the shot below is BVA and his brother DVA who happens to be a industrial designer with his own little firm in atlanta called thing farm.

#3.. i have been watching the Rob and Big show on MTV; and i love it. Rob Dyrdek has been a pro skateboarder for Alien workshop and DC for as long as i can remember. to he honest i remember seeing him is skate magazines since i was in high-school, and i always though he looked like kind of an ass. after watching the show it turns out he’s a pretty good guy. pretty funny and well spoken and over all cool. his friend Big is just as cool. i watched the entire season today and if you have time i suggest you do the same… the show kinda makes me jealous because after 8 years of skateboarding i was never very good and going pro was no where near happening. i wish i could skate all day instead of computer modeling but i guess it just wasn’t in the cards. 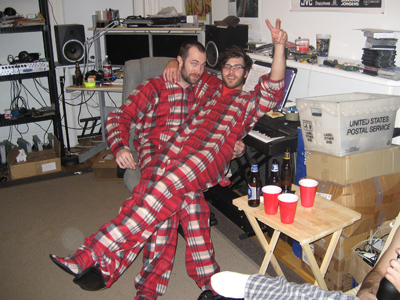